Hey everyone!  As most of you know we are in the process of remodeling our kitchen, which still isn't finished yet, so still no food to blog about.  Yes, we are slow.  We did take off Christmas weekend though to be with our families, so that put us behind.  We hope to put our new counter tops in Saturday and hopefully "almost" finish things up over the weekend.
Below is a picture of me making soap back in November.  Yep, I made some soap for Christmas presents.  They didn't turn out how I wanted them to, but they still turned out great. ﻿ I thought the recipe was going to make more than what it actually did, but it didn't.  Tony made me a soap box to pour the mixture into, but since I didn't have enough to fill the soap box up, I poured the mixture into silicone muffin cups.  Tony's genius idea.  So, instead of square bars of soap I ended up with round bars, which turned out pretty cute. 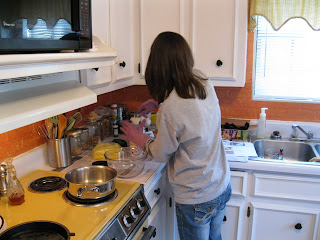 After the soap hardened in their molds for 48 hours, I dumped them out to cure for 3 plus weeks.   I had to flip them everyday so they would cure evenly.  All that has something to do with the lye that's in them.  The ingredients that I used to make the soap were coconut oil, shea butter, almond oil, water, sodium hydroxide (lye), and warm vanilla sugar fragrance oil.   We have been using the soap for several weeks now and absolutely love it.  It leaves your skin feeling so soft and silky.  Tony's already asking when I'll be making more.  My next batch of soap is going to be a type of oatmeal soap made with homemade almond milk.  It will make a bigger batch, so I will be able to use the soap box that Tony made for me.   My goal is to be able to make that around mid January.  If the oatmeal soap turns out as good as this batch did, I'll be doing a giveaway.  The only bad  thing about making the soap is that you have to let it cure for at least 3 weeks.   It's very hard to wait that long. :o) 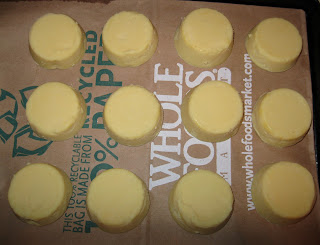 Here we have a close up of one right after I took it out of the mold. Pretty bright looking huh. Here's a bar after they had cured for over a month.  I took this picture with my phone, so the picture is a little on the dark side.  The soap did darken though as it cured. 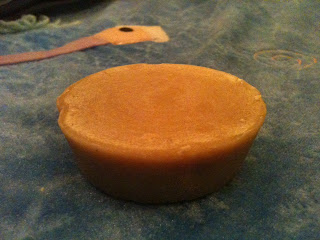 Here's one all wrapped up ready to be gifted. 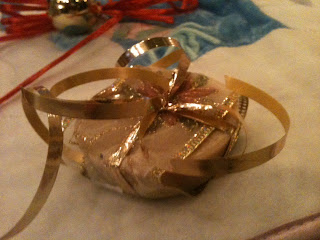 I haven't heard how everyone liked the soap, but I hope they like it as much as Tony and I do.
I hope everyone has a save and Happy New Year!   It will be next year before I blog again and hopefully it will be with pictures of my newly remodeled kitchen.
~Peace~﻿
Posted by Just Us at Friday, December 30, 2011

Email ThisBlogThis!Share to TwitterShare to FacebookShare to Pinterest
Labels: miscellaneous 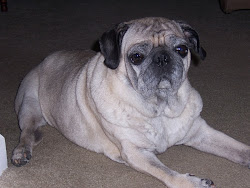 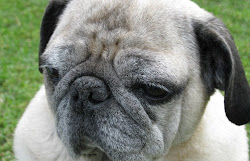